The Island of Kos

Discover The Unimaginable Beauty Of Kos 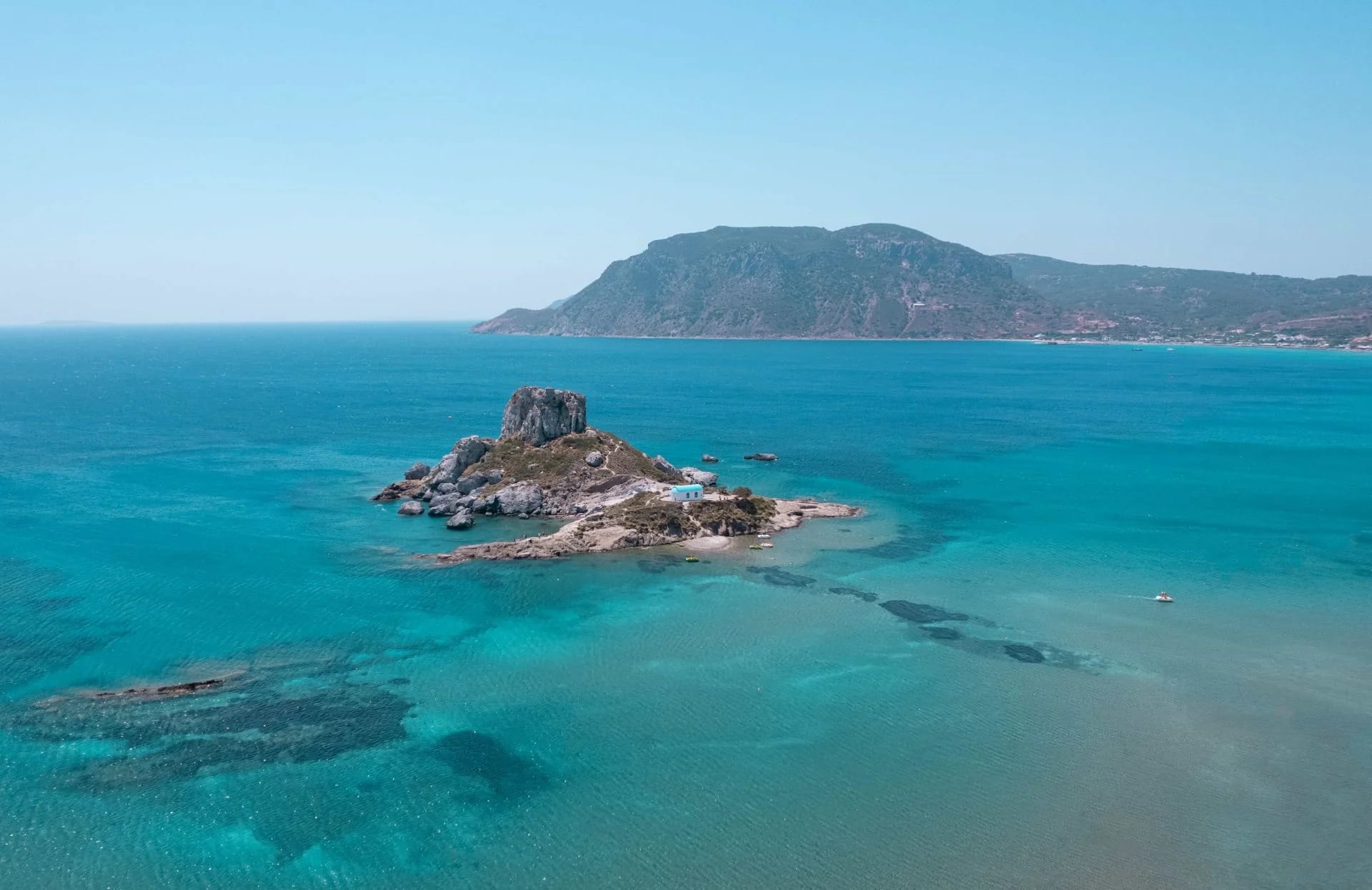 A brief story of the island of Kos

Kos is a world of inspiring stories, mythical monuments, and spectacular natural sceneries.

Characterised as the island of Hippocrates, the father of Medicine who was born and lived on this hospitable land, the third biggest island of the Dodecanese archipelago will take your breath away. Scattered ruins of the once historical city guide visitors through the cultural heritage and rich history of the island through a maze of mind-blowing remains of the Byzantine, Greek and Roman times.

From the Asclepieion, the ancient healing center, the marvellous Medieval Castle of Kos along with the Roman Odeon and the Ancient Agora, and the 2,500 years old Tree of Hippocrates to the exemplary flora and fauna of Dikeos mountain, the sunset views from Zia village, and the pristine beaches of Agios Stefanos, Kefalos, Kohilari, Tigaki, Therma, and, of course, Paradise, your journey to Kos will remain at your heart forever.

One of a kind monuments

Explore the Awe-Inspiring Monuments of Kos

The monuments of Kos

A wide range of ancient and historical monuments offer the opportunity to travelers to discover and explore the cultural heritage of Kos island. Undeniably, the Asclepieion, in Kos Town, is the most critical archaeological site of the island that was used as a shrine of worship for Asclepius, the God of Medicine. Many historians consider that the Asclepieion was the greatest hospital in Ancient Greece, where Hippocrates received his medical education and training.

Since Kos Town was once a historical city that flourished, a series of monuments showcase its rich history. The Ancient Agora, one of the most important commercial centers of its time, the Roman Odeon, which was used as the headquarters of the local senate and a venue for musical concerts, and the Ancient Stadium, an outstanding monument of the 2nd century BC where athletes used to practice, that stands in pieces and remains, stand like memorials of this great past.
As an island that was conquered by various intruders, Kos is a land of castles. From the well-preserved Castle of Neratzia, in Kos Town, an impregnable fortress that was constructed from the Knights of Saint John in the 14th century, and the medieval Castle of Antimachia village that served as a jail for convicted knights, to the ruins of the Byzantine Kefalos Castle with its spectacular views, the fortifications of Kos island truly inspire.

Other monuments worth visiting include Casa Romana, a replica of Pompeii’s houses architectural style, the magnificent Lozia Mosque, a true specimen of Ottoman architecture, and the 2,500-years-old Tree of Hippocrates, one of the oldest trees in Europe planted from Hippocrates himself.

Culture seekers thirsty for new experiences should definitely visit the Archaeological Museum that displays a vast collection of exhibits from the Hellenistic period as well as a spectacular statue of Hippocrates while Antimachia’s Stone House is also a must-visit, where travelers will learn about the folklore tradition of the local inhabitants. Hippocrates Cultural Center, though, steals all the glory; a compelling reproduction of a 5th-century Greek settlement, this landmark revives the way of living in Ancient Greece.

Excursions not to be missed

Must do excursions on Kos island

Surrounded by islands and islets, Kos can serve as an ideal destination for day trips and weekend getaways.

Worldwide famous for its rock-climbing fields, Kalymnos is one of the Dodecanese islands situated right next to Kos, just eighteen nautical miles away. Sceneries of alluring beauty and mountainous wilderness highlight the authentic identity of this island. Reserved especially for adventure junkies, Kalymnos offers the opportunity to stimulate your adrenaline at the highest levels. Whether you are a diving fan or a rock-climbing aficionado, don’t miss this chance to explore the magic of Kalymnos. The journey usually lasts forty minutes from Kos port.

Twenty-five nautical miles away, Nisyros is a great escape for nature lovers. With a captivating charm, famous for its volcanic activity and its picturesque villages, this island is surely a must. Pachia Ammos with its wild scenery, Nikia village with the Porta Square, one of the most beautiful squares in Greece, the island’s volcano that excites the imagination with its hydrothermal craters, and the Volcanological Museum are only some of the monuments travelers should visit. The journey usually lasts one hour from Kos port.

Travelers who seek for an alternative experience, Pserimos is the place to be. A tiny island that distinguishes for its calmness and its peacefulness, is a genuine getaway. Secluded beaches interconnected with hiking trails and the Vathy bay, one of the most spectacular beaches, and the sole village, Avlaki, are literally the only things travelers can do in Pserimos. Those who wish to explore the beaches of the uninhabited isle of Platy, which are said to be the cleanest in the Dodecanese, are highly advised to experience this one-of-a-kind trip. The journey usually lasts thirty minutes from Mastichari village

Surrender To The Magic Of Kos’ Nature. Breathtaking beaches with crystalline waters.

Visit these Beaches of Kos

Lacinated with some of the finest beaches, with aquamarine, emerald, and turquoise waters, in the Aegean Sea, if not the Mediterranean, Kos unveils an unimaginable spectrum of ecstatic summer experiences.

With 121 kilometers of coastline, Kos is considered to have the longest coastline in the Aegean Sea! From organized beaches with sundecks, umbrellas, water sports facilities, beach bars and restaurants to secluded beaches for ultimate privacy, Kos literally has everything. The majority of the beaches of Kos are easily accessible from land and sea.

Those who want to escape the crowds, Kamari, Kefalos (Camel) and Limnionas are the best beaches for total seclusion and privacy. Kohilari is also a terrific sandy beach with shallow crystalline waters; it enjoys strong northern winds, an ideal choice for windsurfing enthusiasts. Marmari, Mastichari, and Tigaki beaches tend to be the most famous sandy beaches on the northern coast, equipped with all the beach facilities. Agios Stefanos with stunning views to Kastri islet is another great option while Paradise beach and Cavo Paradiso beaches in Kefalos are thought to be one of the most beautiful beaches in Kos due to their exotic-like sceneries. On the eastern coast, Agios Fokas, Lampi, and Psalidi beaches are primarily pebbled with clear waters. Distinguished as the sole beach with thermal springs, Therma has a distinct beauty surrounded by cliffs. Its natural spring has healing properties, and its temperature elevates 50°C.

It is definite that whatever your beach preference is, Kos provides a wide range of beach choices for every traveler.

The Concierge Team at White Rock of Kos shares travel tips for your Kos experience!

It is no wonder why Kos is one of the most beautiful island-destinations in the Mediterranean. Preferred from those who seek for a haven ideal for beaches, culture, entertainment, sunshine, and privacy, the Concierge Team at White Rock of Kos shares its travel tips on how to have the most memorable travel experience on the island of Hippocrates.

Mount Dikaios is the highest mountain of Kos elevating at an altitude of 846 meters. The mountain is an ideal destination for hiking and mountaineering enthusiasts. Its jewel is the Chapel of the Lord on the peak of the mountain, which offers one of the most breathtaking views of Kos!

Don’t miss the opportunity to visit the cultural events of Hippocratia Festival that takes place from early June up until the end of October. The festival features a series of events including theatrical performances, art exhibitions, and musical concerts. The representation of the Hippocratic Oath held in the Asclepieion is the most astounding event of all, a magical experience that will make you feel like you stepped back in Ancient Greece.

Situated between the villages of Marmari and Tigaki, the Tigaki Salt Lake is a protected natural environment under the Ramsar and NATURA 2000 conventions due to its unique flora and fauna. Tigaki Salt Lake is also an important shelter for migratory bird species including flamingos and pelicans! Nature lovers can also visit the Psalidi Wetland that has been recognized as an important wildlife reservoir and it is pr otected under the European Network of Natura 2000.

If you are looking for a romantic place to enjoy some quality time with your other half, visit the Zia Natural Park to enjoy a spectacular sunset view. You can get there earlier in order to enjoy a refreshing promenade on the stone paths of the park and have a breath of fresh air overlooking the vastness of the Aegean.

White Rock of Kos – Adults Only